Although the ban on new fuel car sales looms, many drivers still aren’t considering an electric vehicle (EV) purchase. In a recent survey, 24% of Brits cited a lack of charging stations, and 21% blamed the hassle of charging in general for putting them off.

According to Zap-Map, the app and digital platform for EV drivers, there are currently 26,682 charging points in the UK, containing 45,504 charging connectors. However, by 2030, when new gas and petrol car sales will be prohibited, the UK will need up to 480,000 public charge points.

But are some UK areas more prepared for the EV takeover than others? The team at BOXT has calculated the number of public charging connectors per population for various UK towns and cities. To find out if your home town is on the right track, continue reading.

Milton Keynes is the most EV-friendly UK area

This research found that Milton Keynes currently has 620 public charging connectors, the third-highest out of all areas included in the analysis and the overall highest of the towns.

However, as the town in Buckinghamshire has a population of 269,460, it has the lowest number of (435) people per connector, making it the most EV-friendly UK area.

Another 250 more charging points are set to be installed to ensure the area continues to meet the needs of EV drivers. This development comes after the Milton Keynes Council secured a £1.1m grant from the Office for Zero-Emission Vehicles (OZEV), the largest grant of its kind offered by the organisation. 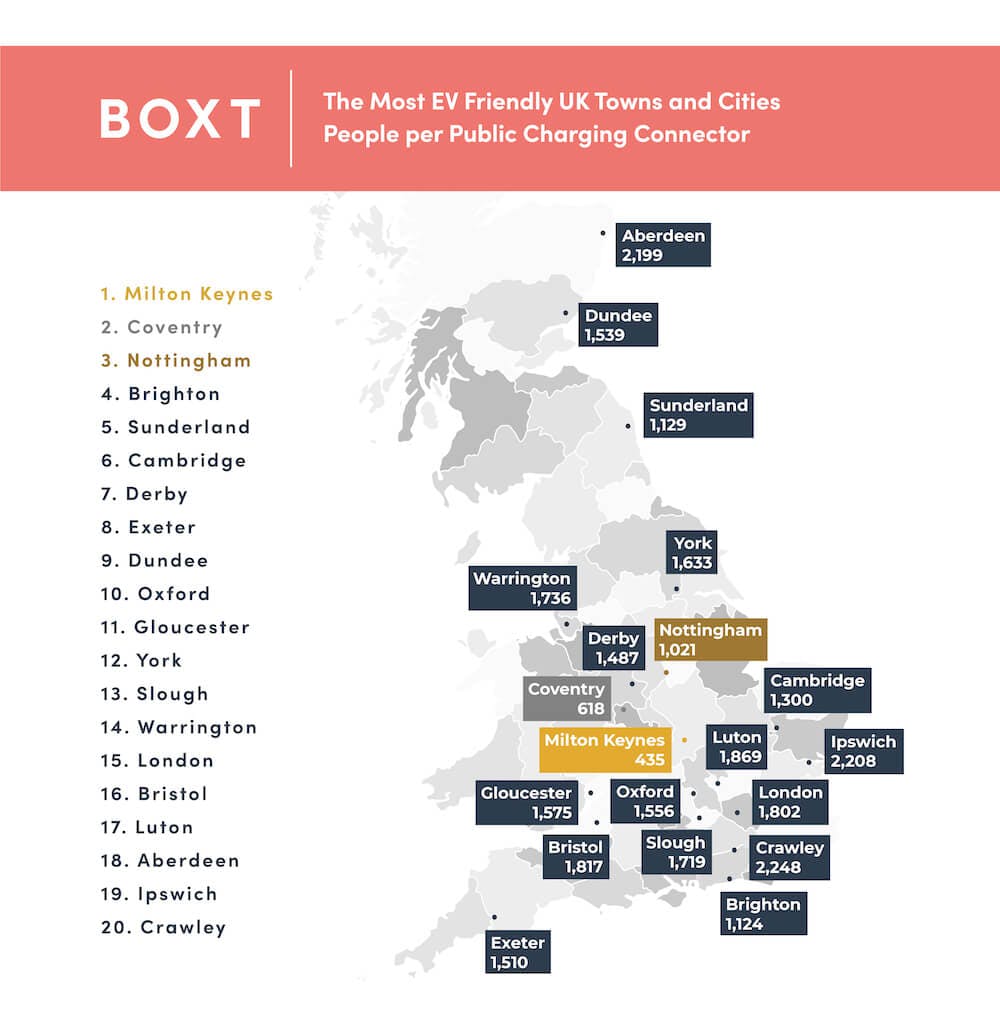 London has the most EV charging connectors overall

While Milton Keynes has the best ratio of people to charging connectors, London has the most overall, with a staggering 5,667 connectors. However, when accounting for the capital’s huge population of 10,212,800, the number of people per connector equates to 1,802. 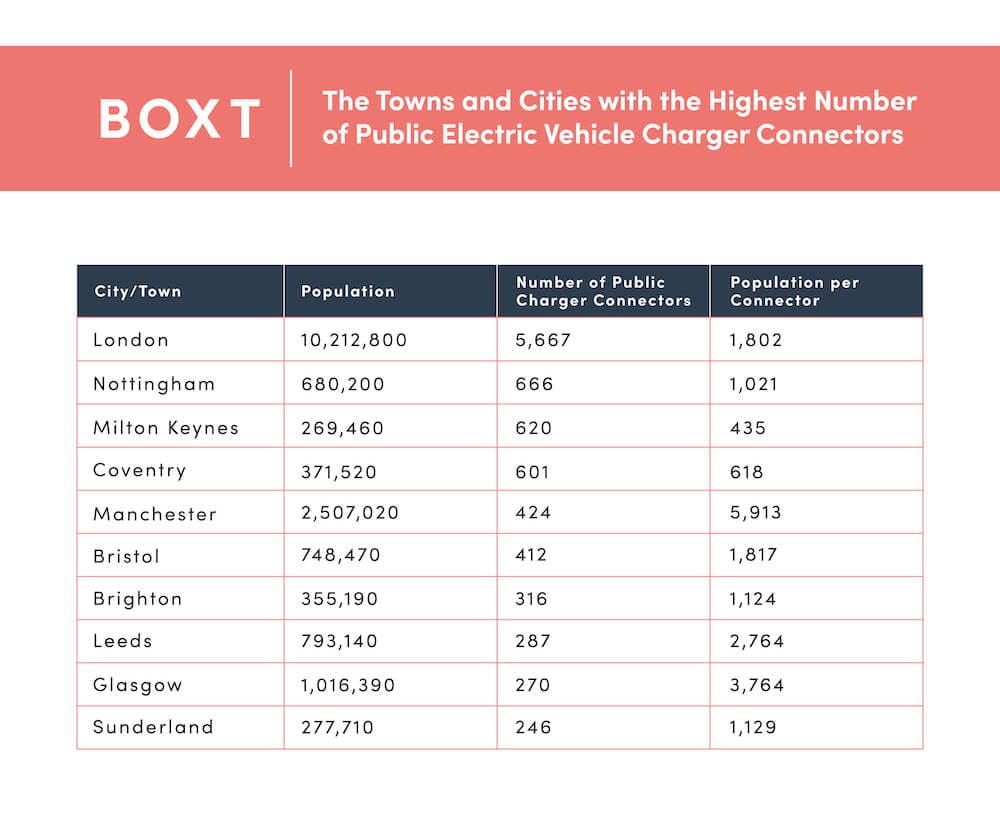 London councils seem dedicated to enhancing their EV charging infrastructure after spending £204,000 on chargers this year, which is more than double the national average.

The capital’s local authorities are also planning to install an average of 39 new chargers per 100,000 people in 2022, compared with the national average of nine per 100,000.

Following Milton Keynes as the most prepared area for EVs is Coventry, with 618 people per charging connector. This calculation is based on the area’s population of 371,520 and 601 connectors.

As of Q2 2021, there are 1,325 ultra-low emission vehicles (ULEV) in Coventry, according to research from the Department of Transport and the Driver and Vehicle Licensing Agency. However, Midlands Connect has predicted that by 2030, the EV use in Coventry will surge by a whopping 3,000%.

In line with this prediction, the Coventry council are taking steps to meet the demand with plans to install up to 400 more EV charging points by 2025.

BOXT’s research found that Nottingham has a population of 1,021 per connector. There are 666 connectors in the city, just 65 more than in Coventry, but there is a much higher population of 680,200.

Nottingham City Council has set an ambitious target to become the first carbon-neutral UK city by 2028. But to achieve the goal, all existing fuel cars will need replacing by ULEVs, which only accounted for 0.5% of all vehicles in Nottingham, according to a 2020 report.

To encourage more drivers to use electric cars, the Go Ultra Low Nottingham is committed to developing an EV charging network, which has received a £2m investment.

Brighton and Sunderland complete the top 5

Brighton placed fourth in the research, as there are 316 EV connectors and a population of 355,190, which equates to 1,124 people per connector.

In a bid to help the city become carbon neutral by 2030, there were 208 on-street EV charging points installed across Brighton last year, following a £300,000 fund from the Office for Low Emission Vehicles (OLEV) and another £100,000 from Electric Blue. There are also plans to add 12 mandatory EV charging bays to the existing 22.

Sunderland came in fifth due to having a population of 1,129 per connector. The area launched the UK’s first fast-charging station for EVs in 2019. On top of this, plans were approved in March to build seven new electric car charging hubs across the North East, including Sunderland, following another £600,000 investment.

Southend-on-Sea is the least equipped UK Area for EVs

The findings discovered that Southend-on-Sea has the worst ratio of 180,435 people to EV connectors, per connector, due to only having two connectors for 360,870 people.

Despite the impending 2030 deadline, reports from January this year cited the area’s council had no plans to install new on-street EV chargers between now and 2025.

The least prepared areas for the EV takeover: 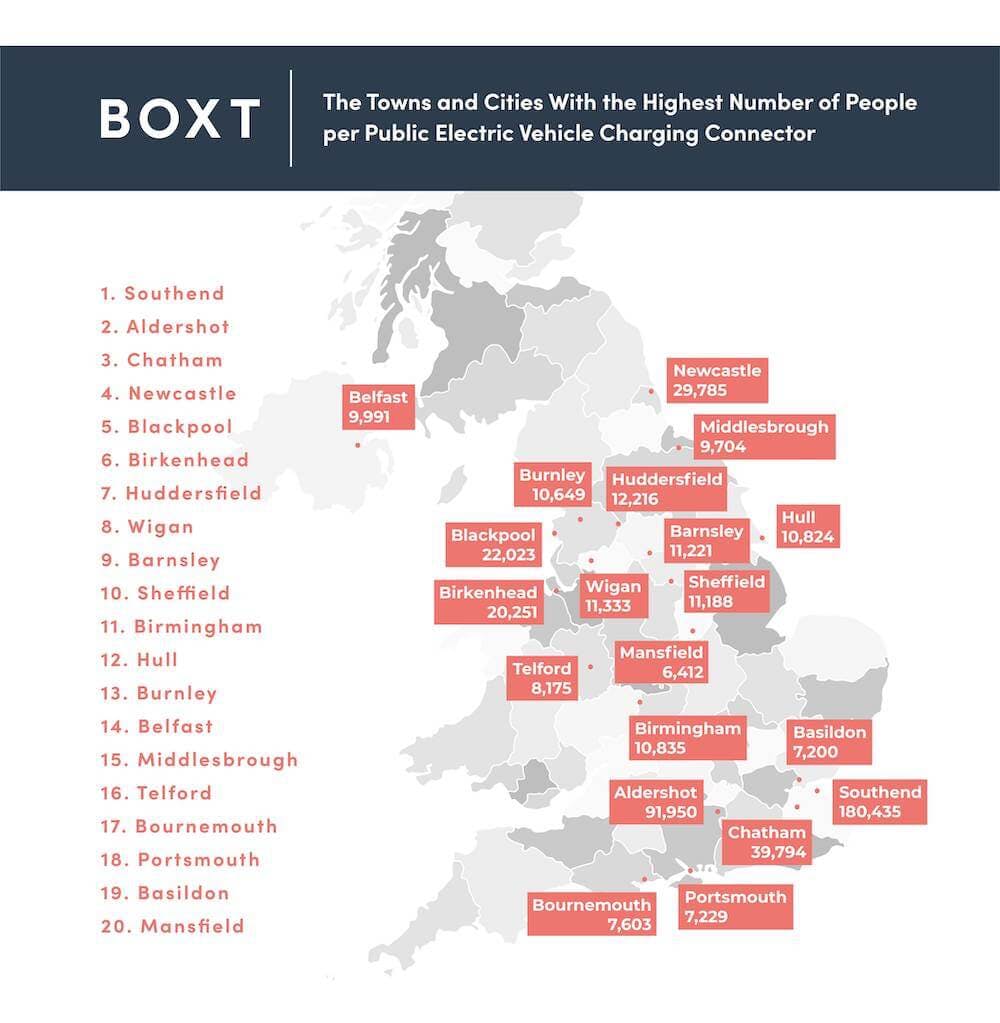 Andy Kerr, the co-founder of BOXT, said: “A flurry in fuel-car drivers switching to EVs is crucial for the UK to meet important carbon emission goals. However, many Brits still don’t feel confident that there will be enough resources to maintain an EV.

“While EV charging connectors may not be a priority for many drivers at the moment, this will soon change when the options for new cars are drastically limited to low-emission vehicles.

“If residents don’t feel able to make the transition to EVs in their area, due to a lack of resources, it could cause them to move somewhere new. Not providing enough EV charging points could even deter tourists from visiting.

“While the UK as a whole isn’t yet on track for meeting the ambitious environmental targets, it’s helpful for drivers to know if their area is equipped to support the EV lifestyle.

“It’s easy to assume that London is the best location for EV drivers due to the high volume of charging stations. However, this research shows that the capital still has a long way to go to accommodate the huge population.”

How many charger connectors have been installed recently?

For owners of hybrid or fully electric vehicles, there is good news. Connector installations have massively increased in the past decade, rising from no installations in 2011, up to 3,829 in 2021. 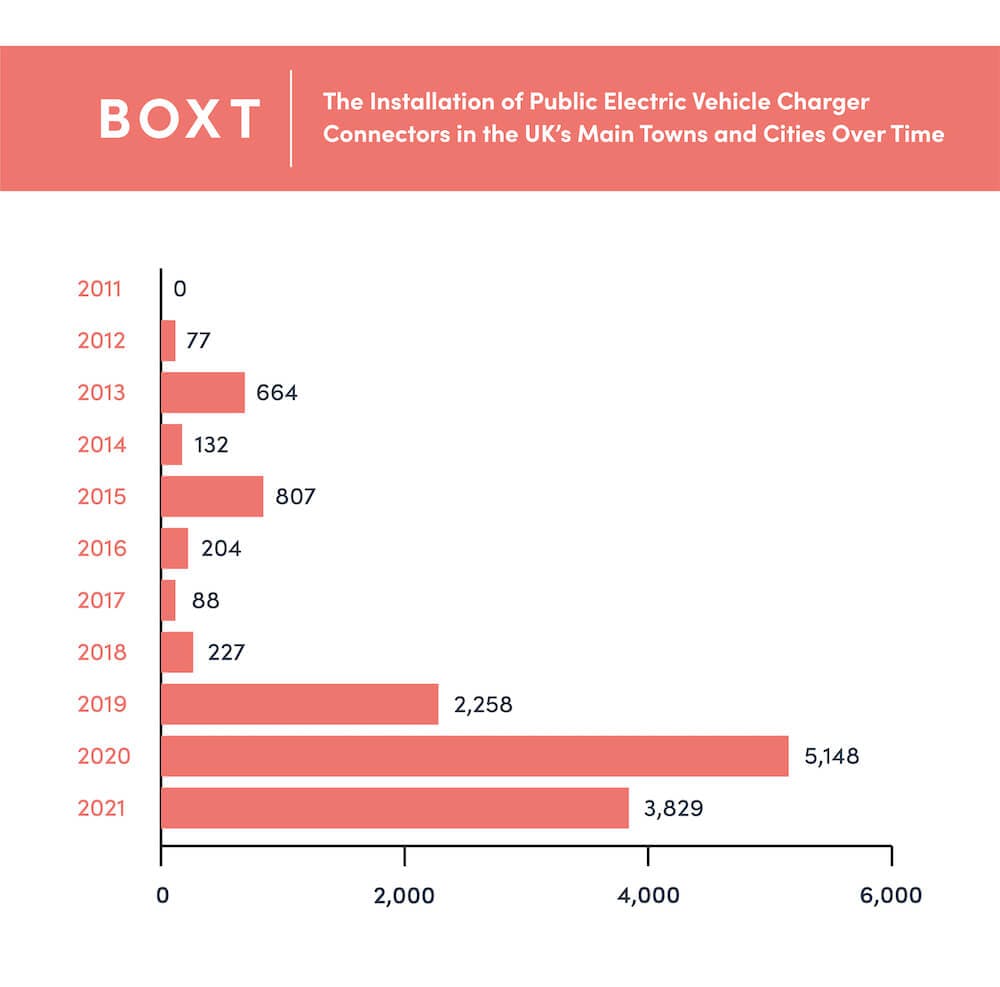 Following the success of the find a boiler and air conditioning tools, BOXT has created an easy way to find your ideal EV charger.

BOXT customers can use the find an EV charger online tool to find the most suitable electric vehicle charger for their vehicle and property.

All you need is your car make and model, postcode, and an idea of where you’d like the charger installed on your property. After following the straightforward online process, customers are instantly recommended the best charger for their requirements and given the option to choose a date of installation*.

All of BOXT’s chargers are compatible with every type of electric vehicle. With the online tool, users can also check whether they’re eligible for the Office for Zero-Emission Vehicles (OZEV) grant.