Energy Increase Impact Across the UK 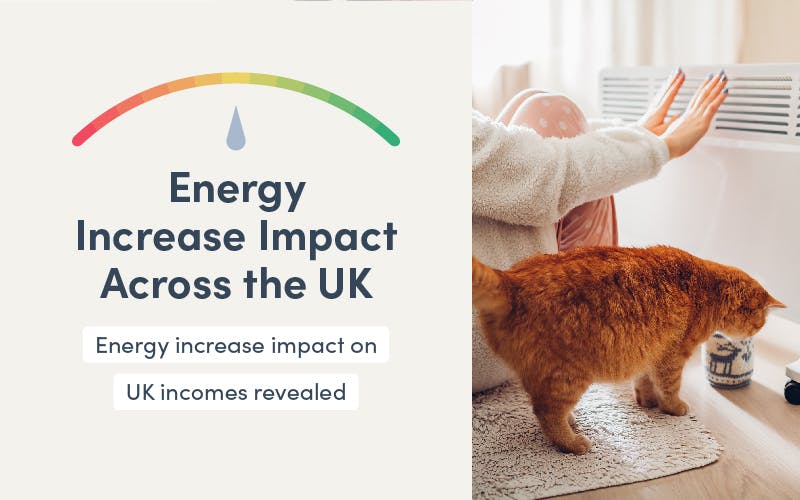 The UK has seen inflation rates soar over the last year, and with the most recent increase to 9.1%, this is the highest the country has seen outside of wartime. There is an ongoing increase in food, fuel and energy prices, further contributing to the cost of living crisis we’re facing.

Energy prices, in particular, have seen big increases over the last year and are expected to continue into 2022, due to multiple factors. The bottom line is that supply and demand have changed. This has led to an increase in wholesale prices, and as such, companies are paying more for gas and electricity, resulting in an increase in your bills.

Heating our homes is one of the main contributors to our energy costs - and this keeps rising.

While modern boilers are more efficient than ever, costs are still going up across the country.

With that said, which regions are going to be hit hardest by these increases in energy prices? We have looked at government data, which is broken down by payment method, to determine how much energy bills are eating into people’s incomes.

UK regions with the biggest increase in electricity bills 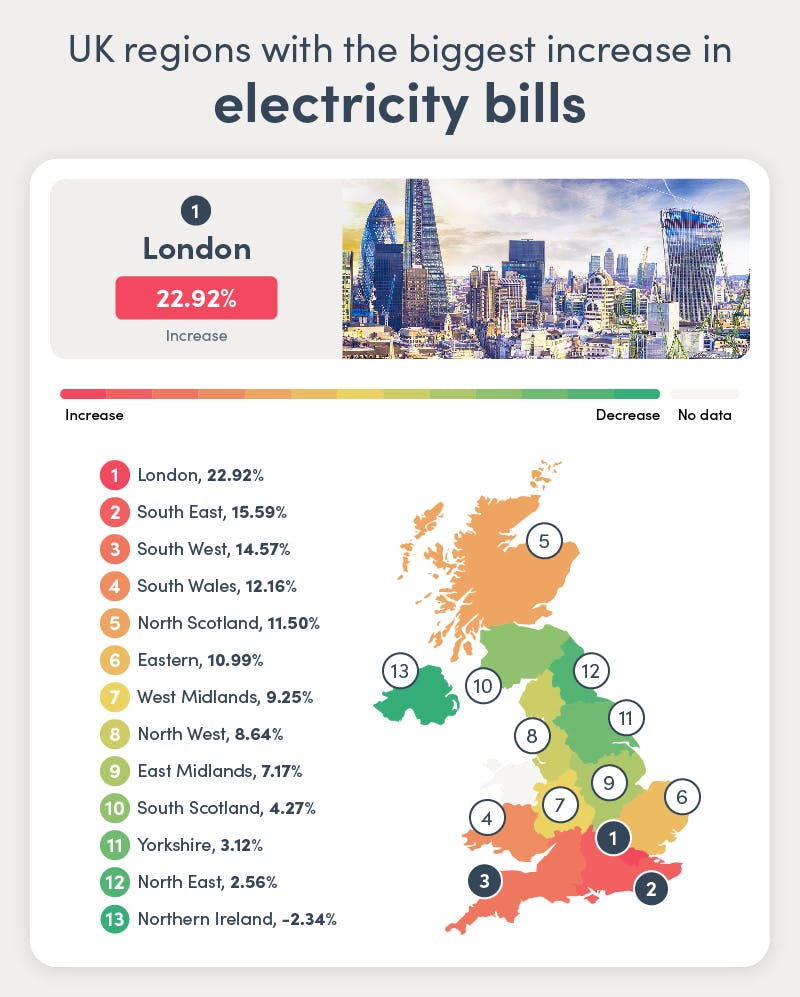 Coming out with the highest overall increase in electricity bills, when worked out as a percentage of the region's median annual salary, is London. Electricity bills have grown from 2.93% of the average income to 3.6% in just two years. And with a poverty rate of around 27%, Londoners could end up being hit pretty hard with the increases in electricity bills and the cost of living.

The South East is the third-largest region in England and next to feature in the top five. In 2019 the region’s residents spent 2.82% of their annual income on electricity which increased to 3.26% in 2021, a growth of 15.59%. Quite a bit of a drop from the region above, which has a higher rate of poverty.

The South of Wales will surely not welcome the increases in electricity bills, given that they have the lowest annual income in the UK. On top of that, Wales has one of the highest poverty rates, at 23%. In 2021, South Wales overall spent nearly 4% of their income on electricity bills, a 12.16% increase from 2019.

Northern Scotland consists mostly of the Scottish Highlands and had an increase of a little over 10%. In 2021, the region spent 3.53% of their median income on electricity bills alone. It is generally thought that higher poverty areas will be affected greater by these increases, but Scotland has a low poverty rate of 19%. 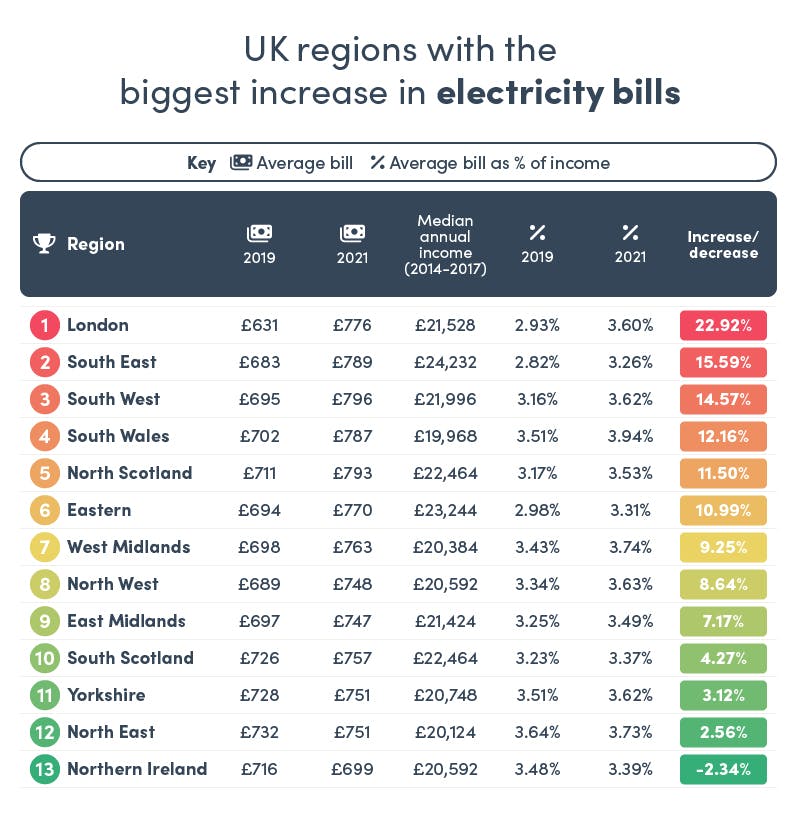 UK regions with the biggest increase in gas bills 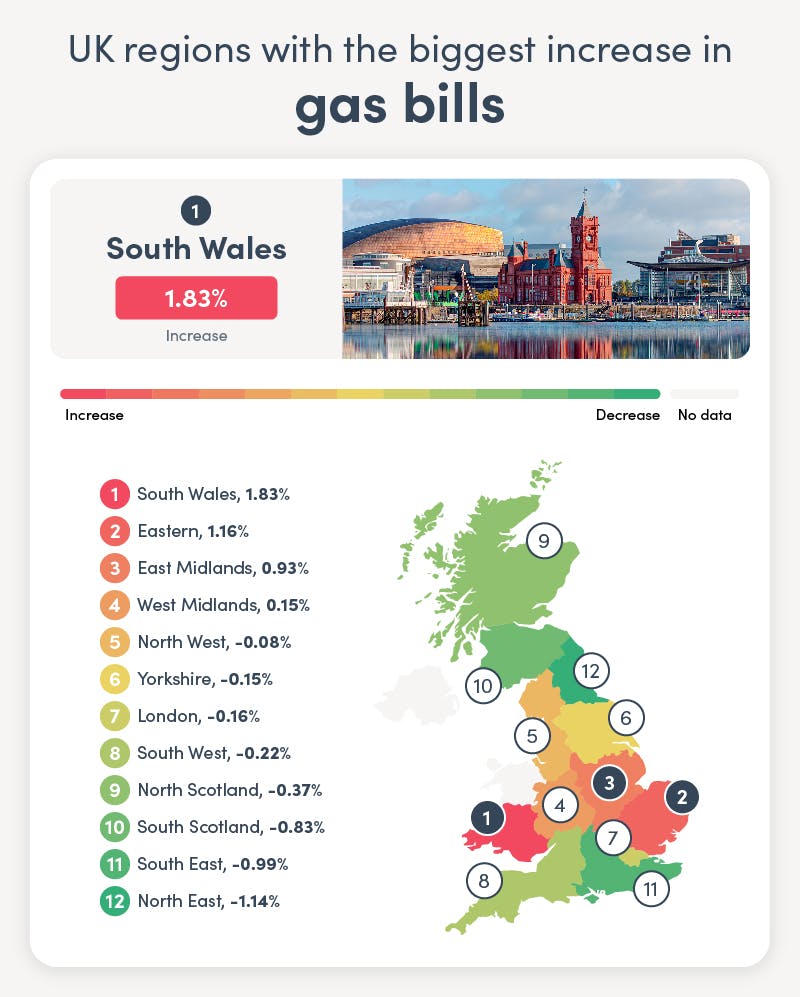 The South of Wales appears once more, with the highest increase in gas bills. In 2021 South Wales spent a further 2.84% of their median annual income on gas bills, a 1.83% increase from 2020. And with further increases expected throughout 2022, the full effects of these increases are yet to be seen, the forecast doesn’t seem positive for this region.

East England saw increases in its annual gas bills, the region had previously spent 2.35% of their annual median income on gas bills during 2020, which increased to 2.38% in 2021. A slim increase for now, but with new cap increases in 2022, it could stand to get much worse.

Next up, is the other half of England's Midlands, on the western side they had a much smaller increase. However, the West Midlands has a much higher rate of poverty compared to the East Midlands, at 25%. With that said, as energy prices increase into 2022, the West Midlands could be hit hard with a quarter of the region on much lower incomes.

The North West ranks next, however, instead of an increase, the region saw a decrease in their gas bills. In 2020, households in the region spent 2.684% of their annual median income on gas. This decreased to 2.682% in 2021, for a difference of 0.08%. While this may be the case currently, with prices having already increased in 2022 and the country set for more increases, this could shift dramatically by the end of the year. 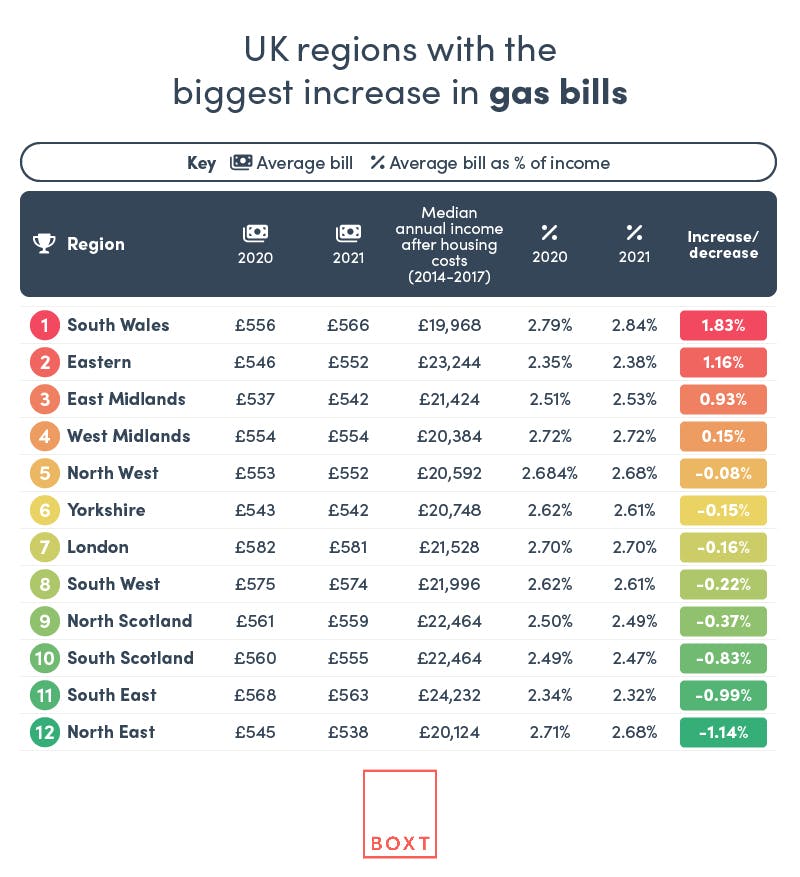 Money-saving tips for your energy bills

We used government data for electric and gas bills and the median income of households in the UK broken down by region.

The regions of Merseyside and North Wales and Southern England were removed from the gas and electric bill dataset due to a lack of comparable income data for these regions.

Poverty rates were taken from the Joseph Rowntree Foundation.

We then took the average weekly income before housing costs, which were defined as “Housing costs including mortgage interest payments (but not mortgage capital repayments), rent, water charges, structural insurance premiums, ground rent and service charges”. From there, we worked out the annual totals, as the electricity bills were also annual.

Once we had both annual totals, we worked out the electricity bills as a percentage of the annual median income for each region for 2019 and 2021, then calculated what the difference was for each region.