Bills of the Future 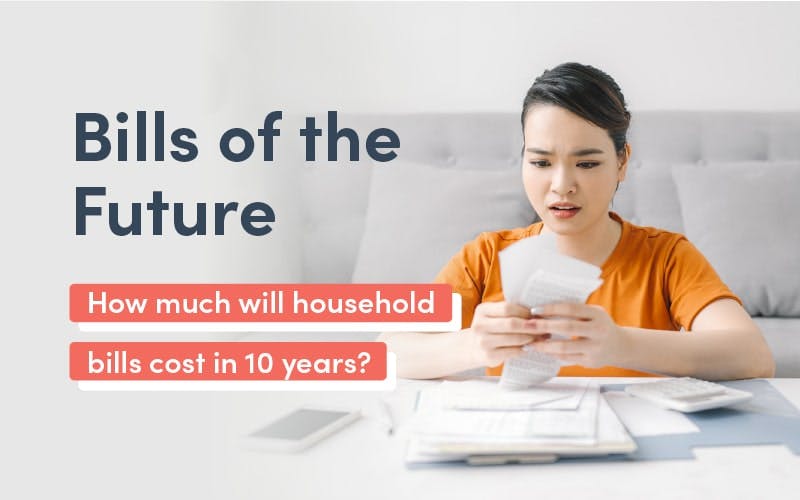 How much will household bills cost in 10 years?

Bills are going up across the UK, from TV subscriptions to water costs, but just how quickly are they rising? With the rising rate of inflation over the last few years, we wondered what our bills will look like in the future.

By looking at government information on the average gas and electricity bills over the last 12 years, we wanted to predict what these costs might be by 2031.

To help you save money on your bills, getting your boiler serviced every year is essential to keep it operating efficiently and catch any smaller issues before they become a more expensive problem. It can even invalidate your home insurance policy or manufacturer warranty if you don’t get an annual service by a Gas Safe registered engineer, leading to higher costs for you in the event of something going wrong with your boiler. You can spread the cost of your annual boiler service over 12 months with a boiler cover plan to avoid paying the full cost at once. You can also save money on your energy bills by investing in a new, more efficient boiler, meaning it costs you less to heat your home.

The estimated cost of electricity bills in 10 years 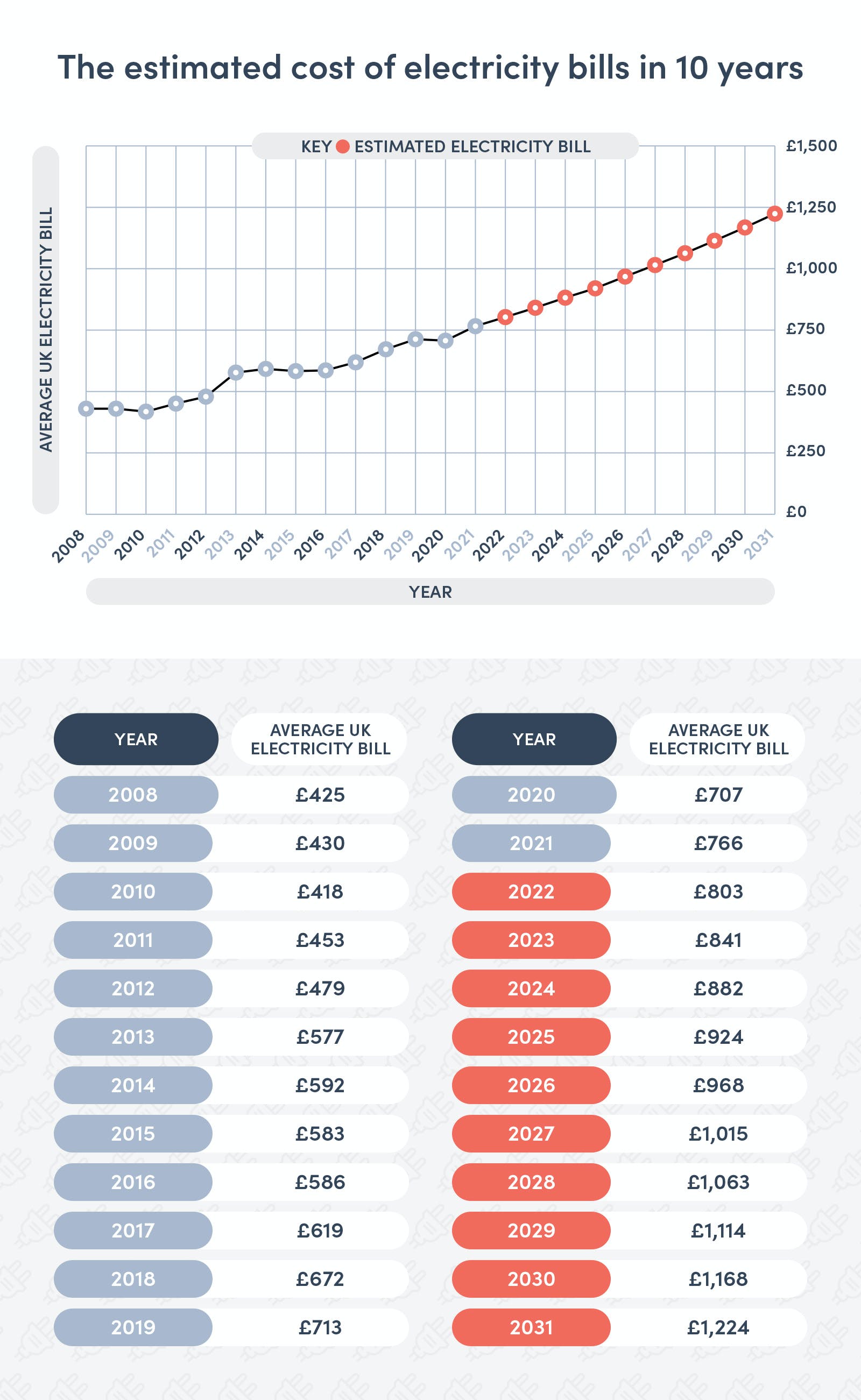 Looking at electricity costs over the last 12 years, we found that prices are rising by 4.8% each year on average. Whilst we use more electricity per household today compared to 2008, the price increase is astounding.

If the average electricity bill in the UK continues to rise at a similar rate as the last 12 years, then in 5 years the average household could pay £968 and by 2031 that figure could actually be on average around ​​£1,224.

The estimated cost of household bills in 10 years 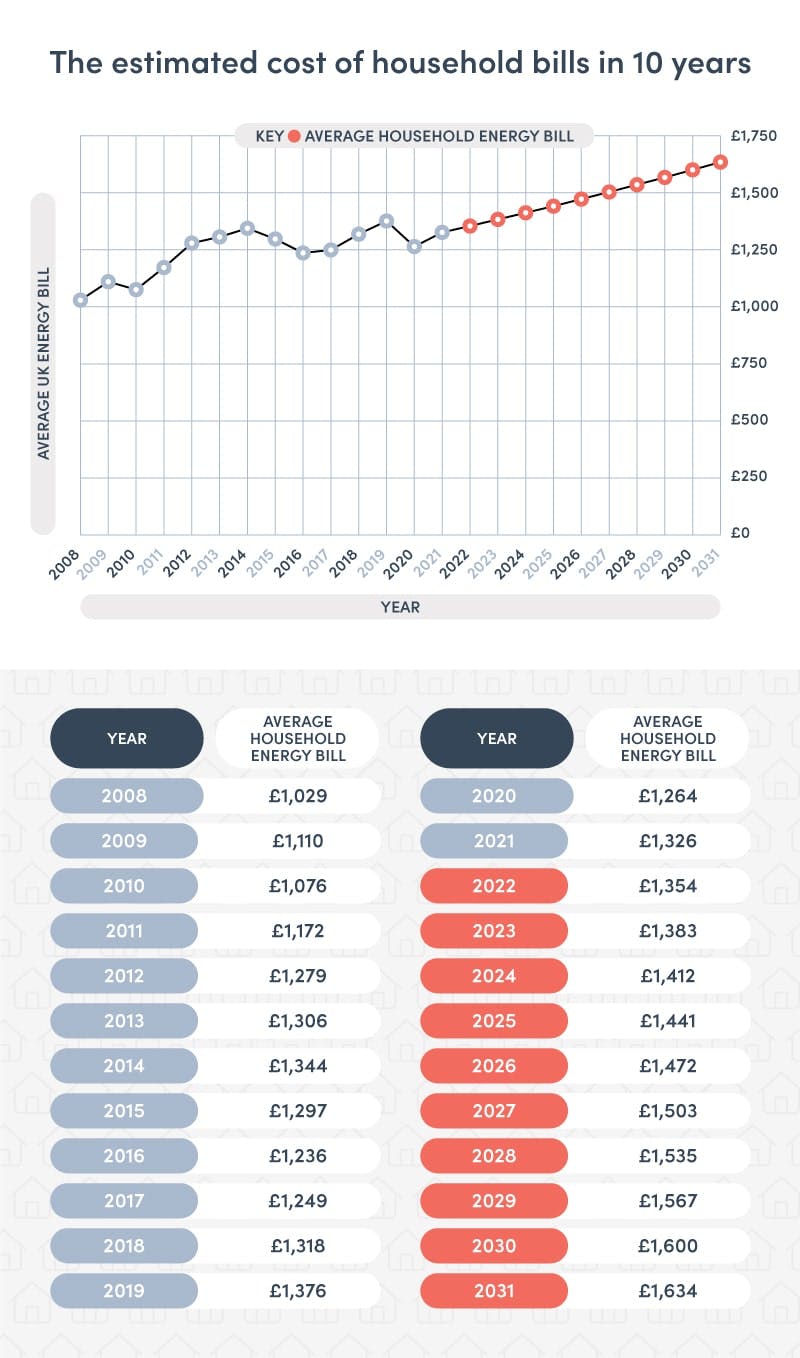 By combining the cost of electricity with the average cost of gas bills, we found the average bill for household energy in the UK.

Today, the average British gas bill is based on a standard consumption of 15,000kWh while in 2008 the average usage was estimated to be 18,000kWh, which could explain the decrease in average bill costs over the last 12 years.

How much does it cost to run household appliances 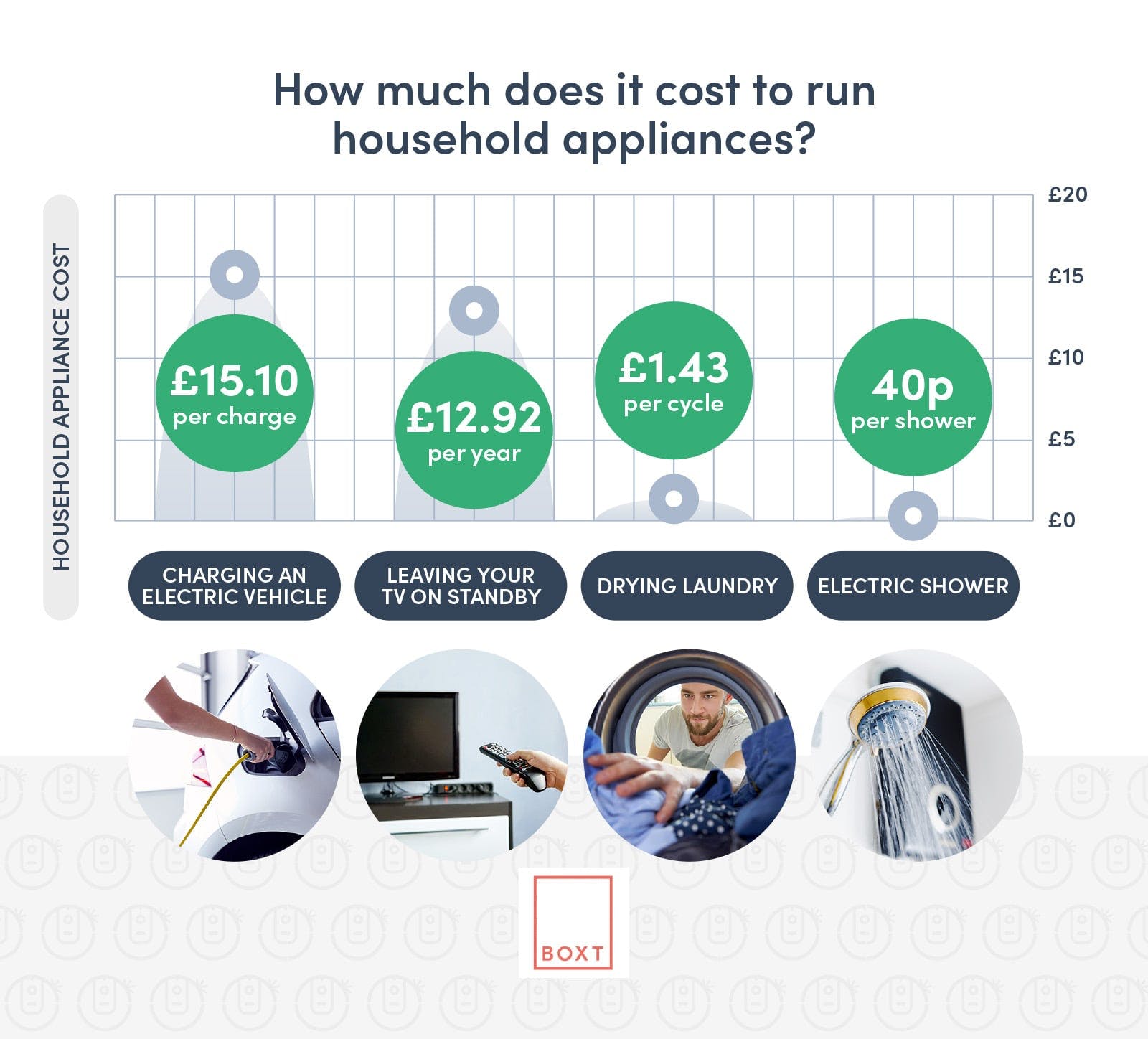 Charging an electric vehicle: £15.10 per charge

Charging an electric car with a 60kWh battery to full charge, costs around £15.10 based on an average rate of 0.28p per kWh. For those charging their electric vehicles at home, a £15.10 full charge would provide around 200 miles.

A study by EcoCostSavings looked at a range of televisions to find the average energy consumption of a household TV. They found that leaving the TV on standby could cost around $16.04 per year, or £12.92.

Tumble drying might be one of the most convenient ways to dry your laundry, however, it could be hiking up your energy bill. Costing £1.43 per cycle, based on a rate of 0.28pKwH, it’s easy to save money by drying your clothes outside.

Taking a 10-minute shower using an electric shower could cost around 40p per day. For those who shower every day, that adds up to £146 a year, and even more if you live with others. Easy ways to save money include showering at a lower temperature and taking shorter showers.

We wanted to find out how much the average UK energy bill will cost in the future.

Information on the average UK energy bill from 2008-2019 was sourced from the Department for Business, Energy and Industrial Strategy - Table 2.2.3 Historical average annual domestic standard electricity bills for UK regions with average unit costs from 1998 to 2019.

Information on the average UK energy bill from 2020-2021 was sourced from the Department for Business, Energy and Industrial Strategy - Table 2.2.5 Average annual domestic standard electricity bills based on various consumption. Information is based on 3,600kWh consumption in cash terms.

Information on the average GB gas bill from 2008-2019 was sourced from the Department for Business, Energy and Industrial Strategy - Table 2.3.3 Historical average annual domestic gas bills in for UK regions with average unit costs from 1998 to 2019.

Information on the average GB gas bill from 2020-2021 was sourced from the Department for Business, Energy and Industrial Strategy - Table 2.3.5 Average annual domestic gas bills by payment type based on various consumption levels. Information is based on 3,600kWh consumption in cash terms.Information on the cost to charge household appliances was sourced from Pod-Point, EcoCostSavings and The Mirror. All prices and data are correct as of May 2022.